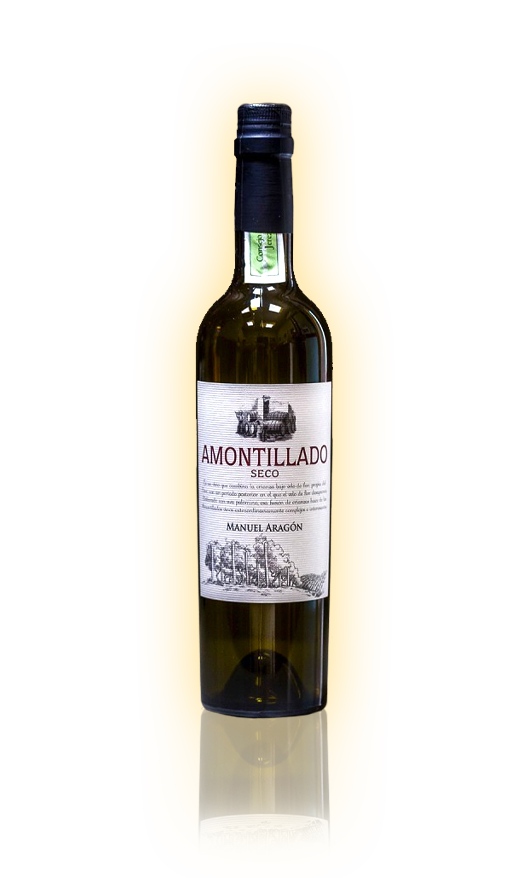 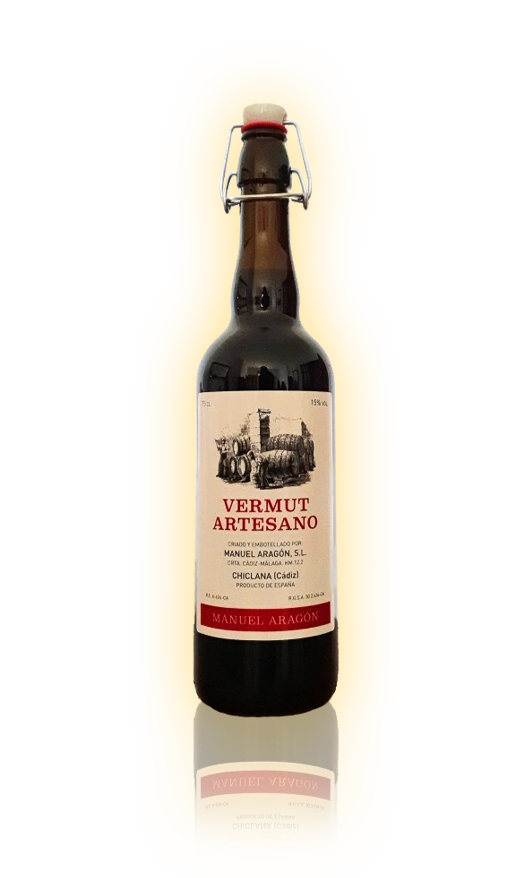 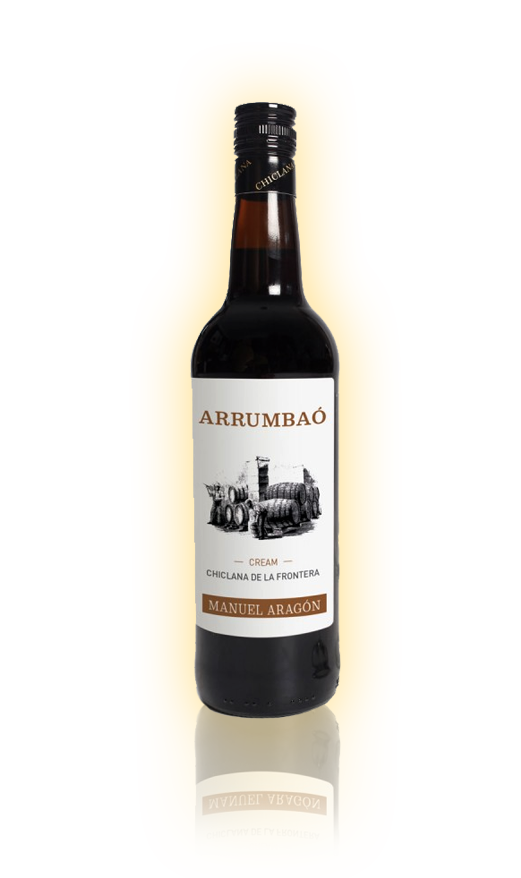 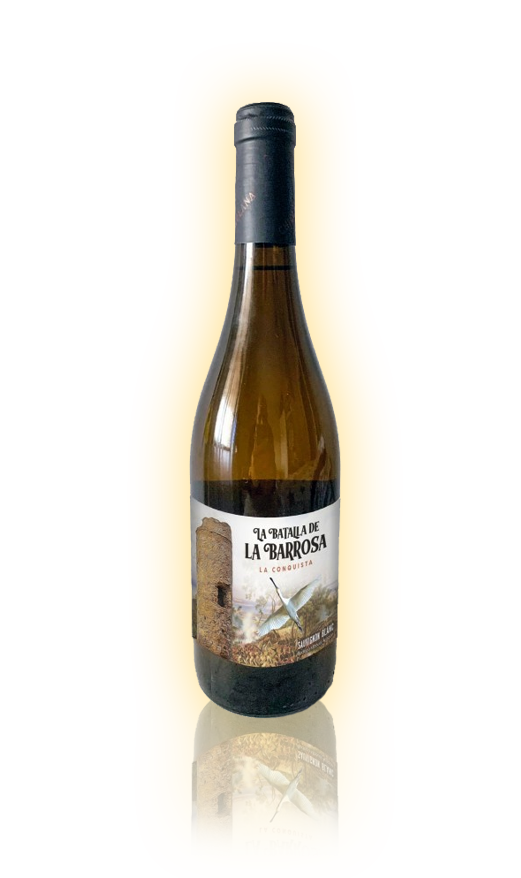 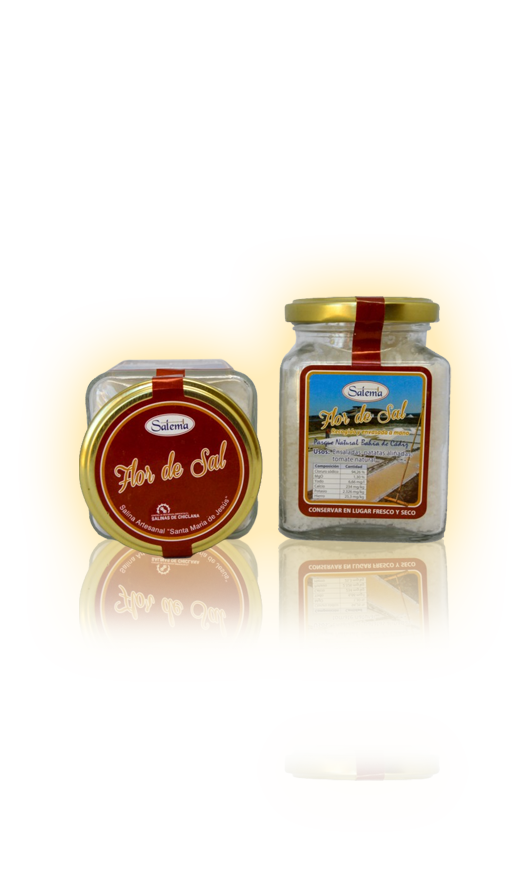 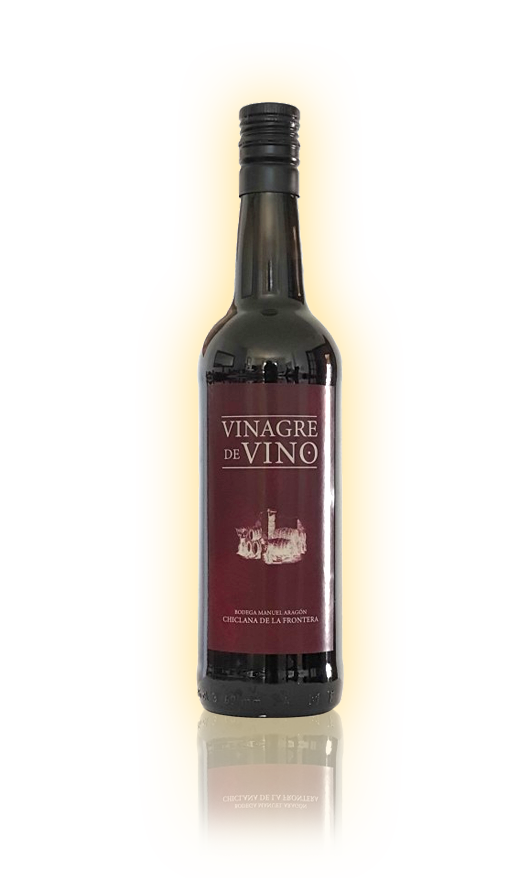 Chiclana de la Frontera is included in the D.O. Jerez-Xérès-Sherry. A privileged region of the province of Cádiz, between the beautiful mountains of Cádiz and the Atlantic coast that permeates the entire area with its influence and that contributes to the unique characteristic of its wines. Chiclana's vineyards are the southernmost in the Marco de Jerez.

The Manuel Aragón Winery produces wines included in the D.O. Jerez-Xérès-Sherry and Vinos de la Tierra de Cádiz, in both cases with the quality mark that gives both the quality of the vineyards and the combination of tradition and good work maintained for more than a hundred years within the Aragón family . 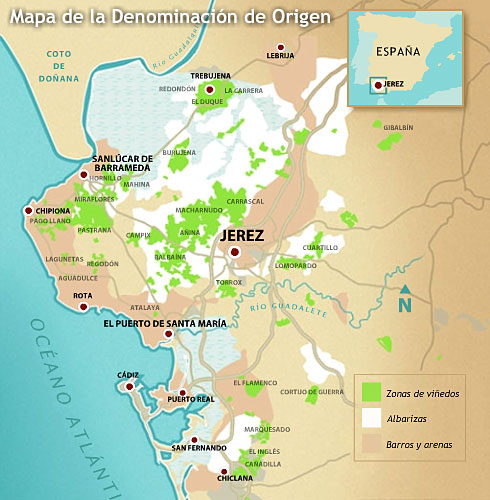 The climate and the soil

In addition to the great importance of the techniques and traditions of viticulture practiced in a given area, the climate and the soil are the main natural factors in the characteristics of the wines.

The climate of Marco de Jerez is warm. Summers are dry and with high temperatures, which causes high evapotranspiration, although the proximity of Chiclana to the Atlantic Ocean moistens the vines, especially at night, due to the effect of the dew, giving it that salinity that identifies our wines. Spring and summer, during which the life cycle of the vine takes place, is subjected to the prevailing winds from Poniente and Levante. The first is cool and humid (it reaches 95% humidity) while the second is hot and dry (with humidity levels around 30%). The average annual temperature is 17.3ºC, with very mild winters in which it rarely freezes. The area enjoys a very high annual average of hours of effective sunshine, between 3,000 and 3,200. The rainfall is relatively high, sufficient for the proper development of the vines, since it is also complemented by the important nocturnal dews provided by the neighboring Atlantic Ocean. 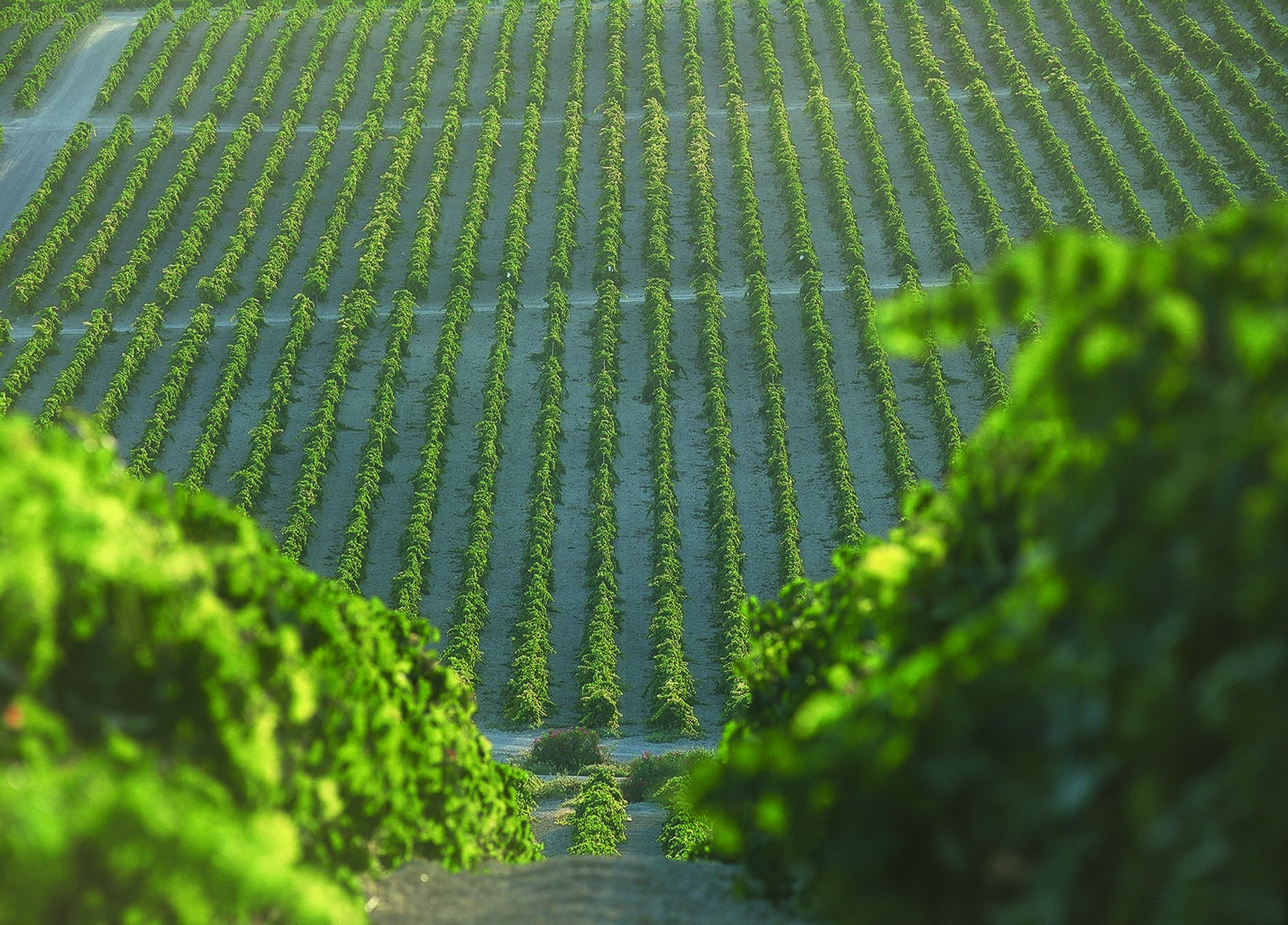 A good part of the soils in the area are covered with limestone soil that in the dry months is dazzlingly white: albariza, rich in calcium carbonate, clay and silica, which comes from the remains of marine animals present in the sea that occupied this area. during the Oligocene. The most important characteristics of this soil are its high moisture retention capacity, storing the rain that falls in winter to nourish the vine in the dry months, in addition to being poor in organic content and due to its white color, it is capable of reflecting a much of the solar radiation. In rainy periods, the albariza opens like a sponge, absorbing a large amount of water. Later, with the arrival of heat, the surface layers of the soil are compacted, thus avoiding the evaporation that produces the high luminosity of the area. The albariza is easy to work and allows an excellent distribution of the roots.

Traditionally, winegrowers have divided the production area into payments, considering as such each small area of ​​vineyards, with homogeneous soil and mesoclimates, and delimited by topographic accidents. Our vineyards are located in Pago Campano, Cañadillas and Marquesado. 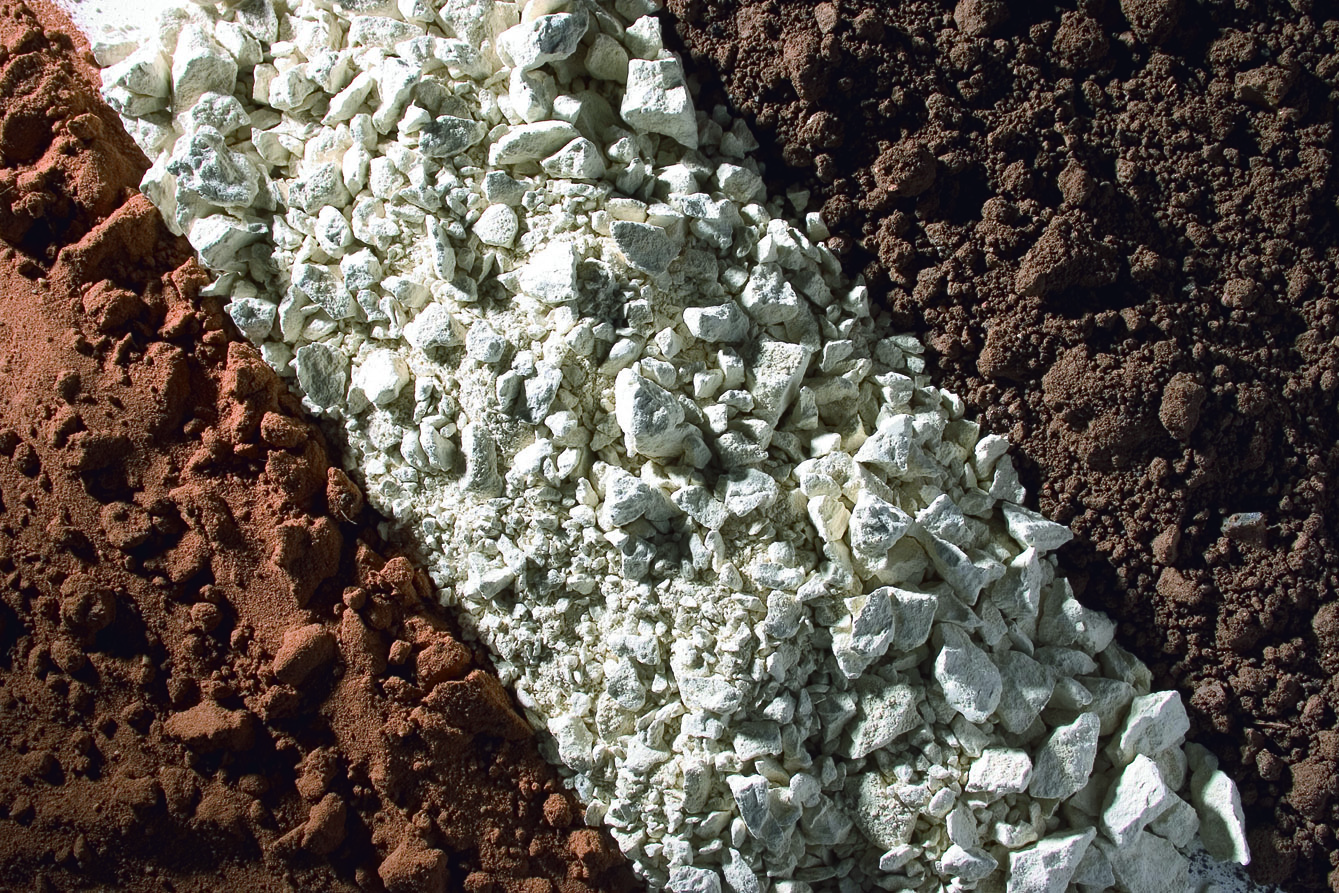 The cultivation of the vine is a complex process that includes multiple processes that definitely influence the final product: the wine. The preparation of the land, the planting, the grafting and the care of the plant involves careful work by the winegrower to achieve the highest quality of the future wine. During the winter rest of the vines, pruning is carried out, the objective of which is to shape the plant and regulate its growth to obtain the fruit with the desired quantity and characteristics.

The harvest, traditionally carried out at the beginning of September, does not have an exact date since it depends on variable climatic factors, as well as the variety of wine and the type of wine to be obtained. Choosing the optimal time for harvest requires the knowledge and experience of the winegrower and winemaker. The grapes are cut in the vineyards of the Manuel Aragón Winery exclusively by hand. The cut bunches must reach the press without being damaged, where they proceed to the trellis, in which the woody part of the bunch is separated, and to the crushing and pressing of the grapes, which gives rise to the must. 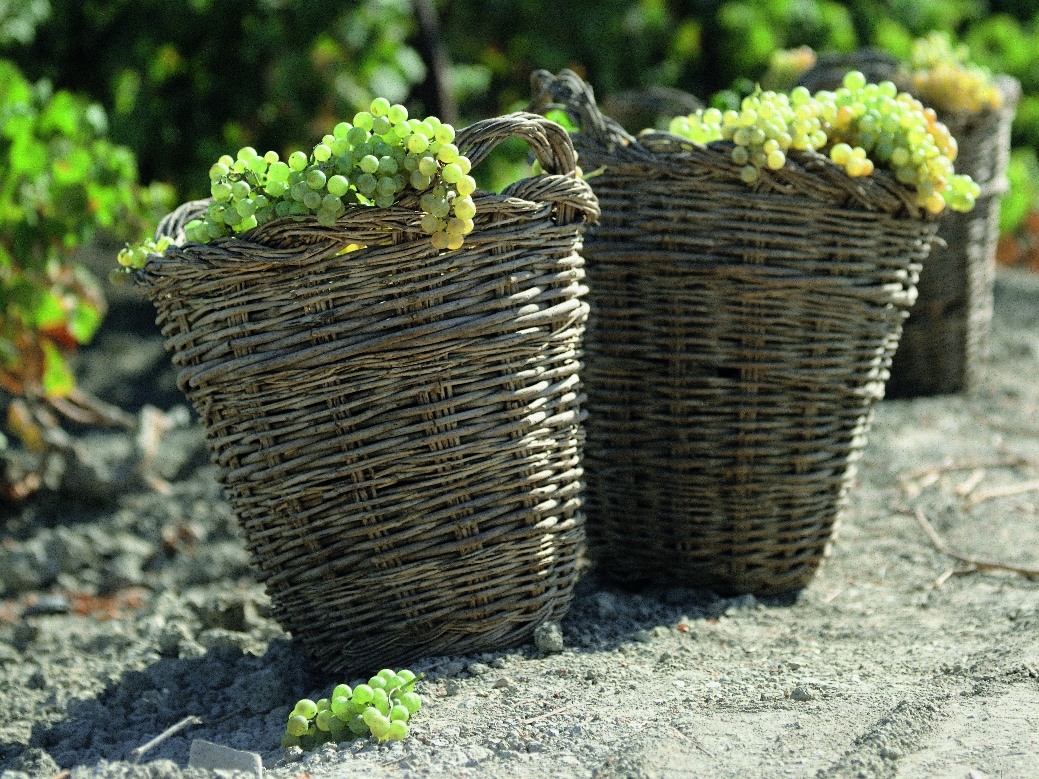 Other wines produced by the Manuel Aragón Winery and classified as Vinos de la Tierra de Cádiz, also use other grape varieties, such as Sauvignon Blanc, Tempranillo, or Syrah. 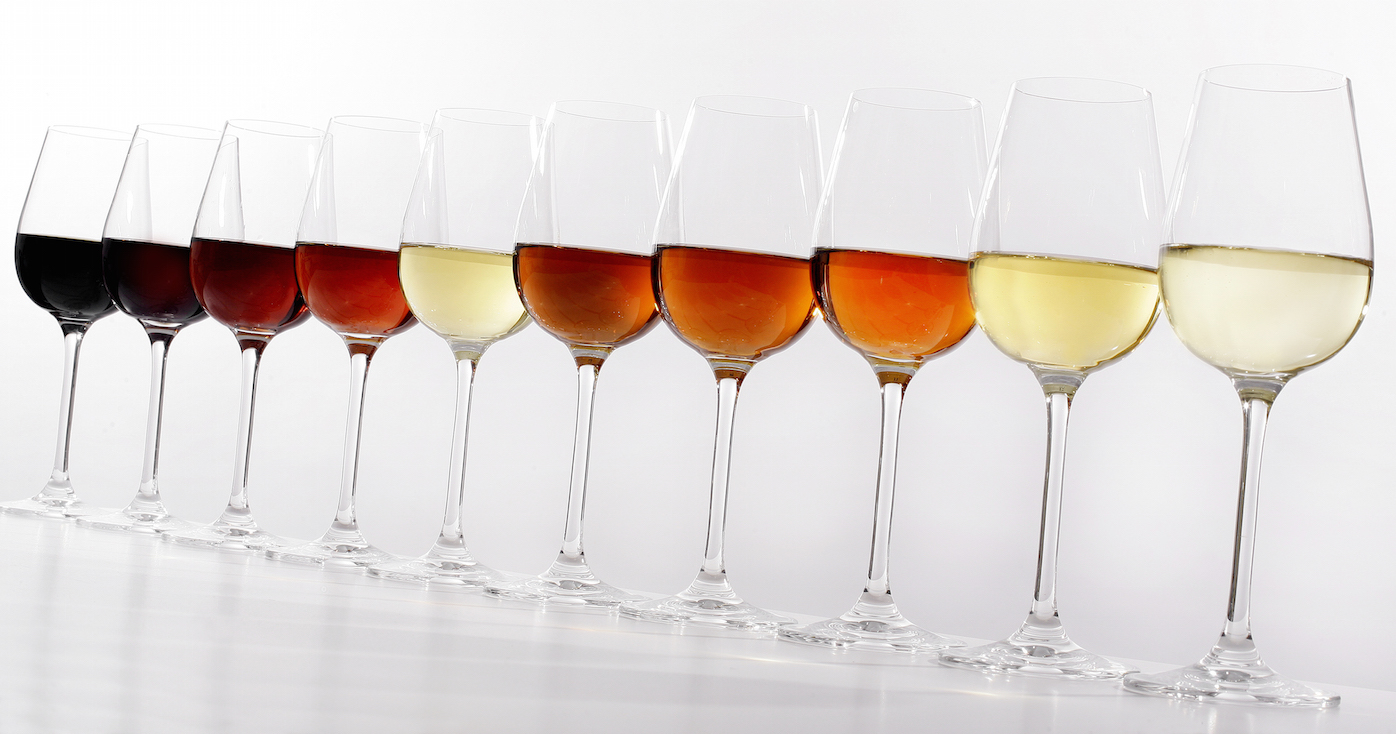 The must undergoes a natural fermentation process in stainless steel tanks at a controlled temperature, where the sugars are transformed into ethyl alcohol by the action of natural yeasts, giving rise to the base wine.

One of the characteristics of the Chiclana wine is that it is a fortified wine or, in winery terminology, "headed". The base wine is transferred to American oak casks where a certain amount of wine alcohol is added, in order to slightly increase its final alcohol content. This practice has its origin in the need, centuries ago, to stabilize wines that were destined for consumption in very distant markets and that, therefore, had to be "protected" in order to carry out long journeys. Today the practice is maintained for oenological reasons. 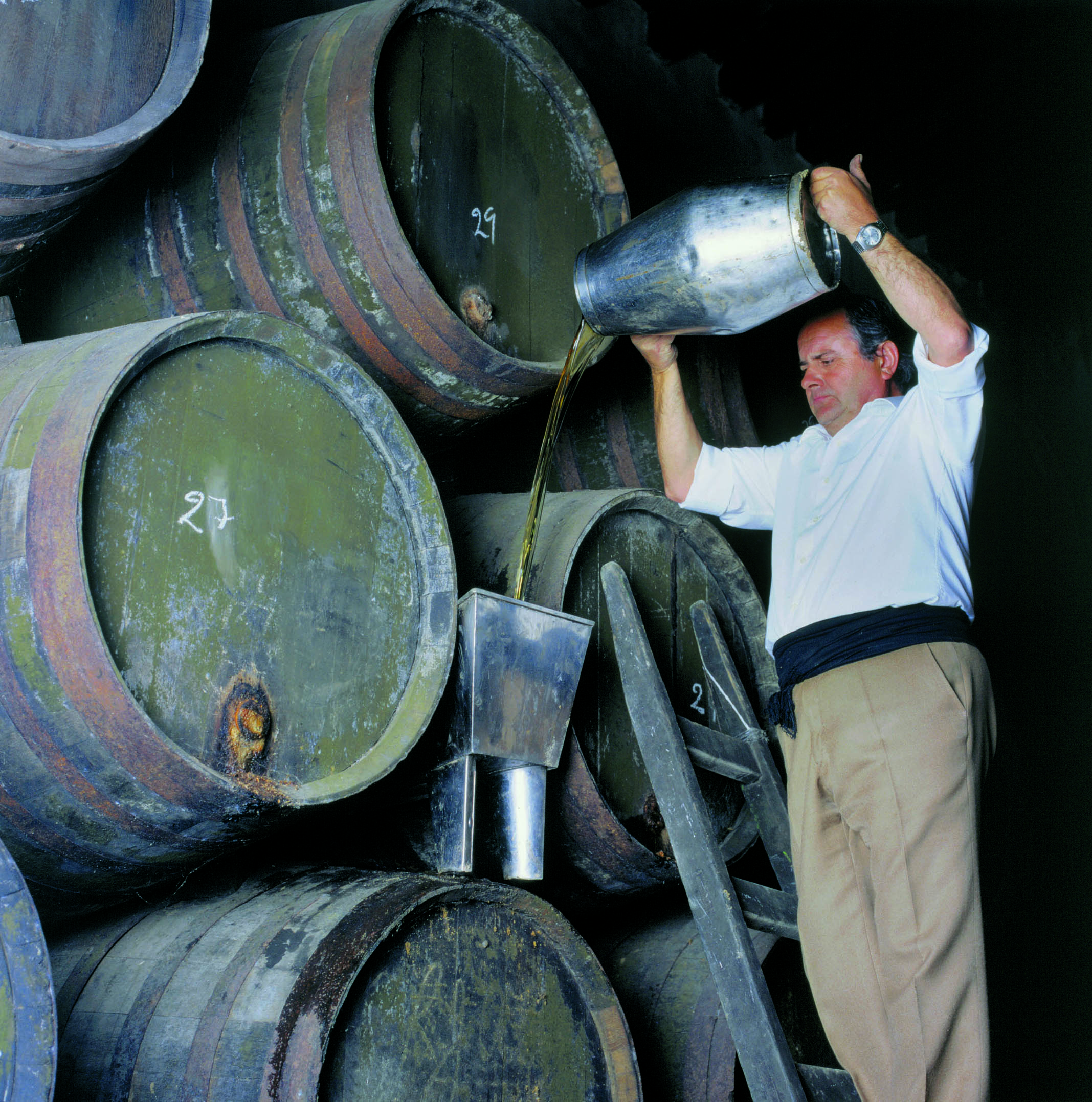 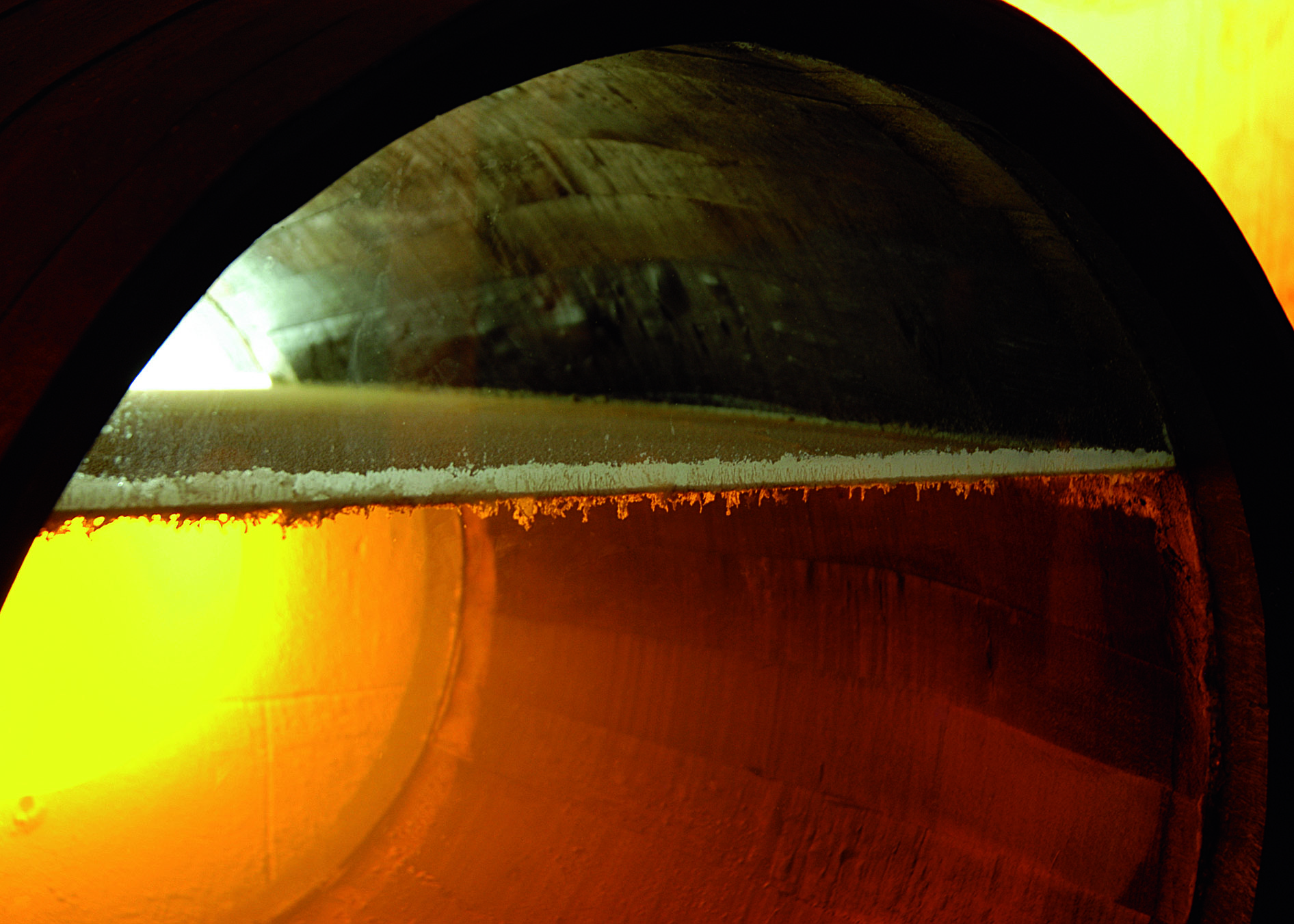 The fine wine from the Manuel Aragón Winery (Fino Granero) is headed up to 15º in order to favor the development of the Flor veil, a whitish layer of natural yeasts that is deposited on the surface of the wine, isolating it from the air from the rest of the wine. boot. In this biological aging process, the natural protection of the yeasts will prevent the oxidation of the wine and give it very special organoleptic characteristics. The fine granary is produced in two modalities, the filtered one, the traditional Fino Granero, and the Fino Granero en Rama, in which the filtration is minimal, with what the sensation when tasting it is the closest thing to drinking the wine directly from the boot from the winery, with a greater intensity of flavor, smell and color.

Biological aging under the flower veil lasts for a minimum period of three years and is carried out in American oak casks. 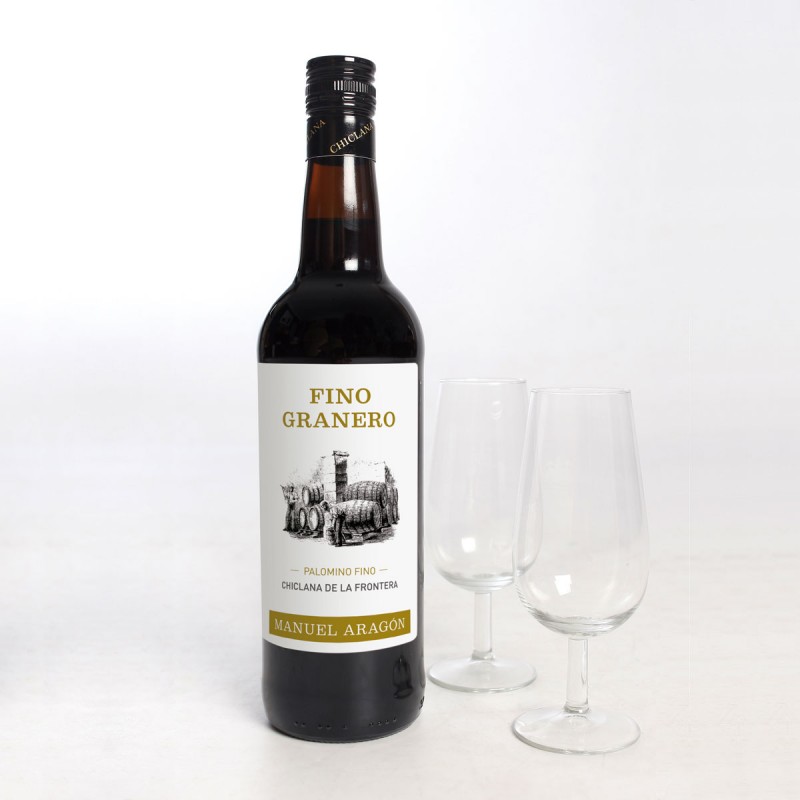 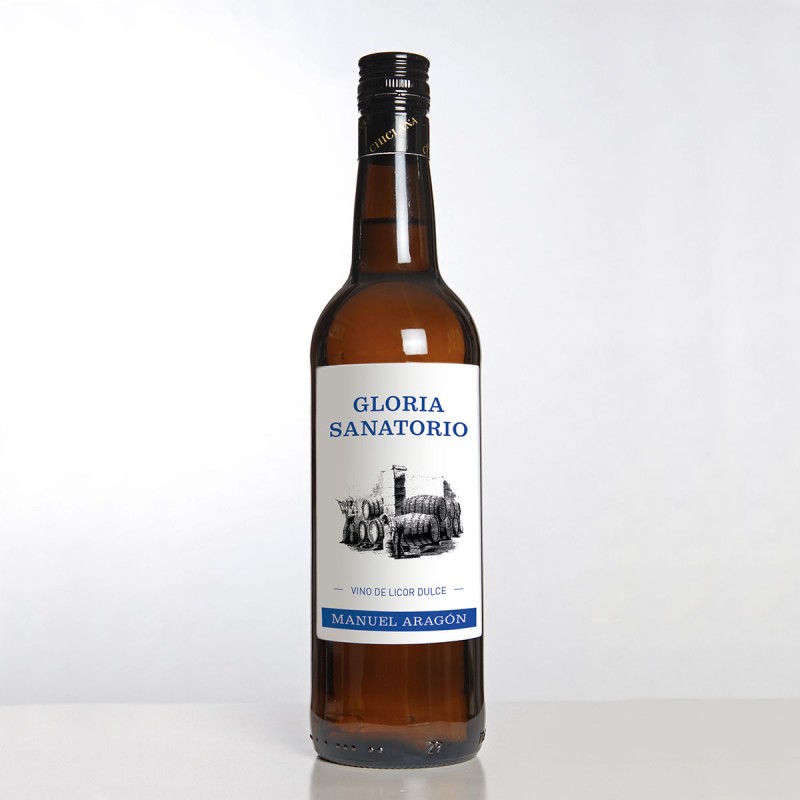 If the base wine is headed up to 17º, the veil of flower is not produced, with which the aging takes place in contact with the air, which favors the slow action of the oxygen in it. The aging thus produced is called oxidative aging. Examples of wines with oxidative aging are the Oloroso ones, such as the Oloroso Tío Alejandro or the Oloroso Muy Viejo Manuel Aragón.

In wines made from Moscatel or Pedro Ximénez grapes (with grapes of that denomination), the fruit is overripe (on the vine or by exposure to the sun or sunlight), which concentrates both the sugars and the natural acidity of the grape. On the other hand, its fermentation is carried out only partially by adding alcohol in the process. This is the case of the Moscatel Gloria, the Moscatel Los Cuatro, and the Pedro Ximénez Muy Viejo Manuel Aragón.

Some wines combine in their aging an initial process of biological aging and a subsequent one of oxidative aging, such as Amontillado El Neto or Amontillado Muy Viejo Manuel Aragón.

In this sense, the palo cut type wine is peculiar. When a wine is tasted in its initial phase and the oenologist considers that it must follow a biological aging process, the boot is marked with a sloping line, a "stick". On the contrary, when the taster initially discovers a structure in a wine that advises oxidative aging, he marks it with a circle. Sometimes a wine aged under a flower veil later shows the taster specific characteristics that recommend oxidative aging. In that case, the degree of alcohol is raised to 17º and the "stick" crosses with another. We thus have a "palo cut" wine, such as the Palo Cortado Muy Viejo Manuel Aragón, an extraordinary limited edition dry wine.

There are wines that are produced with a single variety of grape, but others are obtained by mixing or nodding different wines, for example, odorous with a part of Pedro Ximénez, such as Cream Arrumbaó, or Hoyo Membrillo, two excellent wines with great character and a lot of body from the Manuel Aragón Winery. 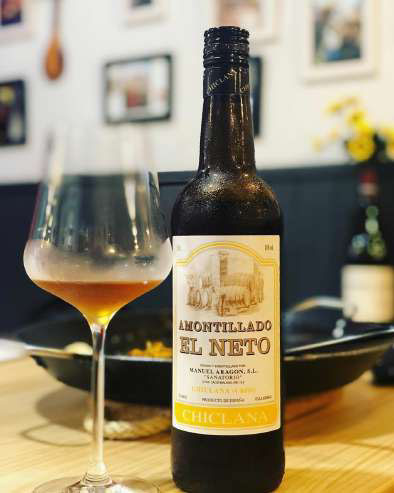 Sherry wines are aged using the traditional criaderas and solera system. The boots (600 liter capacity) are stacked at different levels. The lowest level is called the solera because it is level with the ground and these casks contain the oldest wines. The next row is the first criadera and the wine from their boots is substituted for the one extracted from the solera for bottling. In turn, the wine from the first hatchery is replaced with the youngest wine still from the boots of the second hatchery located on it. The result is exceptional wines that maintain the highest quality year after year.

The dynamic aging of the Marco de Jerez wines allows an exceptionally long aging. In fact, some of our wines are among the oldest in the area, with ages well over 30 and 50 years. 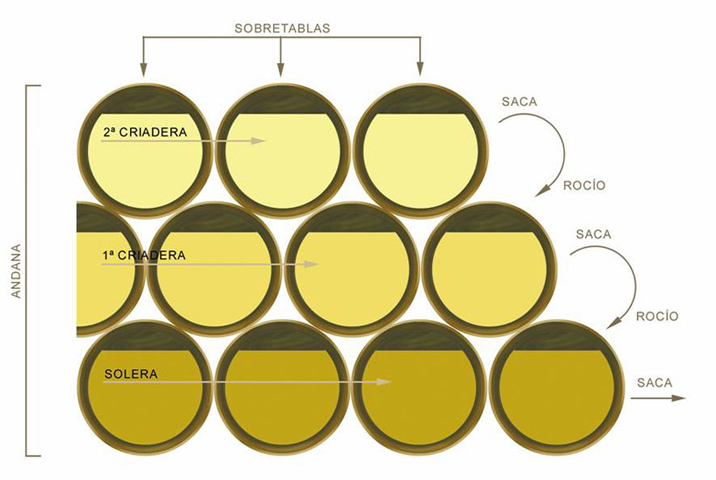 VISIT THE MANUEL ARAGÓN WINERY AND YOU WILL HAVE A UNIQUE EXPERIENCE OF THE WORLD OF WINE!